It’s the end of 2020 and my sloth knows no bounds
and I am fortunate to work at home and have a home
to work in. It’s the end of the plague year, not
the end of the plague, and I’ve seen America naked,
can’t unsee it now: the greed and self-centeredness.
It’s where we found ourselves, my daughter said
on the phone today. And to our great good fortune,
I replied. It’s the end of 2020, and both things can be true
at once. We can love what is great about the place
while despising its brutality. My sloth will soon
be getting a kick in the ass, and work will resume.
My sloth will slither out like the year we didn’t want;
together they can binge-watch a brighter time
from their spot below the bleachers, like in Heathers.
Posted by Ellen McGrath Smith at 11:56 PM No comments:

A Kind of Poem

It’s kind of a big day, the winter solstice, kind of important

that two planets will converge

800 years ago there were all kinds of meanings for “kind”

that now are said to be obsolete,

though they’re kind of not, if you think about it.

“Kind” could stand in for genitalia back then,

which kind of makes sense, since it also meant both “generation”

and inherited features that marked one

as member of a clan or tribe or family. Kin.

though it’s said more in the South

than in the North. It’s been enlarged

to allow for connections beyond DNA,

when family’s not enough.

Anne Sexton’s refrain, “I have been her kind,”

is a vow of empathy and solidarity

among women, even the most abject

in our world’s long history. I return this gift in kind

when I tell her, Anne, I have been your kind,

and pretzel my legs the way she did

and leave behind wreckage I try to repair

with a compulsive convergence of words.

We aren’t kind to one another anymore. Some

reserve their kindness for the ones

whose skin is kin. The pundits lament

our tribalism to explain sedition. 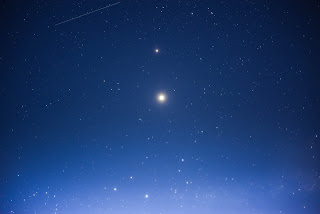 Saturn and Jupiter converged when the Magi

sought the newborn Christ, which is why

it’s being called the Christmas star.

What kind of consolation can we find in that

amid plague and graft, we who were taught

that this is a different kind of civilization

than the brutal empires of the past?

Is it still possible for us to unite

in the name of a warm and fuzzy babykind?

Always be kind, the saying goes, because

you never know what someone else is going

through. It’s become a kind of cliché,

but that doesn’t mean it isn’t true.

In a world of heartless rulers, kind people

that sometimes converge to change things

big and small. It’s kind of a big day,

every day, to seek that kind of convergence.

Photo by Mishal Ibrahim on Unsplash.com
Posted by Ellen McGrath Smith at 6:46 PM No comments: 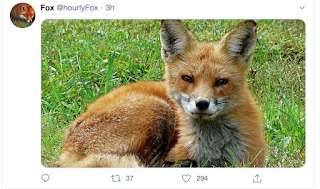 @hourlyFox shows up in-between outrageous news.
In one, two kits faux-fighting; in another, one is caught
by the camera in a searching and fearless moral inventory
out in the middle of a well-mown field. I have leased
out my soul to these animals, no strings attached save
their promise to keep being foxes, living on the fringe
of the mess we've made, scoring petty carnage to fill
out their streamlined bodies, staring clear-eyed into night.
Sure, I've watched the YouTube videos of eccentric Britons
with pet foxes—the best buddy movies of all, IMHO,
but I prefer these freeze-frames of them in the quasi-wild,
insouciant beyond survival, russet streaks against green.
Wherever they're about to go next I can't go, though
it's comforting to be with them for an hour or so.
Posted by Ellen McGrath Smith at 11:10 AM No comments: 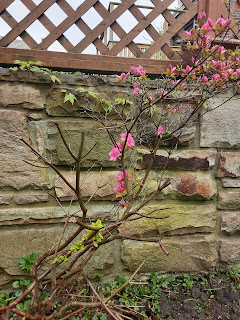 There is no color in my world except the redbud out the bathroom window,
the royal blue sweater I'm wearing, the reticent green of the spider plant
creeping out of a nest of dry brown coxae. May neighborhood memories:
cut grass and red sauce from an open window I passed at the corner
of Mayville and Elmbank, a house with canvas awnings and neat lawn
setting off the pale robes of the virgin the lady of the house
looked out at for sustenance, her hands deep in Palmolive and grease.
I take the pink azalea as a symbol of the nation: two roots piping out
of the miserly clay, one leading to a gnarl of beige unfruitfulness
while the other flowers the imperative of spring, an asymmetrical song.
So that's another color, giving the lie to my assertion. If I look hard,
this poem's whole premise falls apart. The husband at the corner
of Mayville and Elmbank turned out to be abusive. I never saw the wife.
If we seek and ingest as much color as we can, will that make us immune?

Posted by Ellen McGrath Smith at 1:12 PM No comments:

Why We Can't Have Nice Things 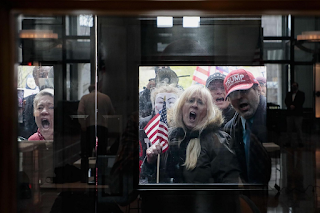 [image by Joshua Bickel, The Columbus Dispatch; image description in the poem]


Someone tweeted the other day
that the pandemic has turned us all into dogs:
We roam the house in search of food.
I have two pounds of yeast
I haven't used yet, though I plan to
make bread and bagels and more.
It's active and dry, which is what we have
in common. There's a piece of sky
outside my office door that changes
its expressions from time to time,
though its default is a glower.
I hope the pantry moths don't invade
the huge sacks of rice and flour,
so it's back to those sticky pieces
of cardboard where their little wings
twitch before they die. Often, while working,
choral music grims me into a groove
in solidarity with ancestral plaguees,
calming me with its lucid existence-
is-suffering vibe. I had planned a retreat
at the Merton monastery this June,
but by then will I even need one?
So much streams into our house
these days, but how much of it is clean?
I've been watching The Wire of late
though it makes me nervous the way
the characters get so close together,
even when they're not fighting or
having sex. Yesterday in the news
was a picture of right-wing protesters
pressing their howling faces against
the glass of a shut government door.
They were asserting their right to go out
and spread the virus. Like a zombie
attack, April Flynn said. This is why
we can't have nice things, I replied.
I practice yoga with a remote teacher
who says "fuck" a lot. Some would say
it's inappropriate, but it's comforting to me.

Where and with Whom Would You Like to Spend the Pandemic? 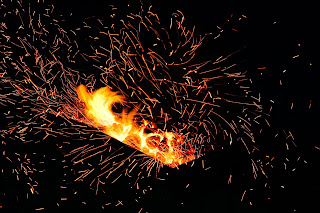 For this quarantine, I would like to be in Greece
to ride it out with Jack Gilbert, who knew how to live well
in isolation, mortar the days with soft stoicism,
keeping the city of our birth in a battered strongbox
covered with gems and cuckoo shells.
He knew how to piss in the pitch dark,
how to be an archaeologist of shame, resentment,
blunt force, infidelity. With Jack Gilbert, I could be
honest about the dung I'm made of, the many deadbolts
that kept me landlocked in a Pittsburgh he escaped
well enough to fully praise. Jack would wait
like a bridegroom for deliveries of soupbones.
With the raw relish of a buckle-man
and the undistracted patience of a surgeon,
he'd slice into the sweet cake and cassava,
never eating more than he needed to fuel his goat-path walks,
taken with thematic regularity—for variation,
a gathering of ripe figs in his shirt,
lifted to reveal the eternal conversation
between the vigilant checkpoint of his navel
and his bottom ribs. Over and over, I would tell him
how "Threshing the Fire" is the poem I go back to
whenever I'm ready to break something, leave
a lacerating shape of myself in big plate glass
as evidence of my escape from or into the ringing world.
He would tell me to write my own "Threshing the Fire"
as he trimmed his beard to the angles of royalty
on playing cards and cigar boxes, my cue
to give him space and get to work, leave
all the windows alone. And yet he wouldn't
be my writing coach, would never critique
my writing at all, only listen as I read it
around the fire on starlit nights, because
hadn't the quarantine taught me anything,
his glinting eyes would imply, hadn't I learned
that the only good writing is subsistence writing,
what one does by dint of having been gored
by the impulse? To write once is to seem
to remove the sharpness, though the wound
only seems to close, the way a lake at dusk
seems to shrink, especially when hemmed
by trees or mountains that bend inward
like parents tending the baby they always wanted,
the one who, leave or stay, would always shine
for them. When I was young and fiercest drunk,
I would quarantine myself, play Leonard Cohen,
and read Jack's poems out loud, I am hammered,
I am hammered, I am hammered into the sun,
and what he got right about Pittsburgh
was its casual violence, its hygienic enactment,
like when my Irish grandfather and some guys
followed a man out of the bar, where'd he'd bragged
about sex with a ten-year-old neighbor,
and kicked the living shit out of him in an alley,
then straightened up and called it a night
and went to the workmen's midnight mass at the Point.
Without much dancing in the streets this spring
and the quarantine keeping everyone inside,
the city's harder edges re-emerge from under
the artisanal trim of recent years. I hear the echoes
of fury slapping resignation multiple times
across its face, the sacramental drip of sweat
and blood. Being quarantined in this is like
a time-machine back to the city Jack Gilbert
and I knew, the cracking knuckles of freight trains
pushing through. We would be better off elsewhere,
better off in Greece where our bruised fists
ripen like figs, and the fathers in their saturnalias
crouch beneath our shadows at noon.

Posted by Ellen McGrath Smith at 12:47 PM No comments:

Hey kid, I'm not a boomer,
and even if I were,
I'm not a centrist or a
corporate shill, and even if I were,
I'm willing to bet half my paycheck
your white male ass grew up
in the suburbs, and you're
waging an Oedipal war
against the hands that fed you
because you've Mastered Ideas,
thanks to a red-in-the-face
eighty-year-old heart patient
who you think will magically
right the wrongs of the world
so you don't have to pay
your student loans back
when he's spent most of his
time in Congress ranting
(won't you tell us
what he's done
in the 13 years
as Senator railing
against the —sound familiar
—hands that feed him power).
Hey kid, are you even looking
at what's happening right now?
We've got a global pandemic,
our elections under attack,
and you think us boomers
or near-boomers never heard
the word "establishment" before?
You think we didn't see your boomer father
put your mother down, and tell her
there were more pressing matters
than her rights? Do you think
we don't know white male rage
when it comes from left field?
And for the love of God,
do you fucking think
we haven't read Marx?

Posted by Ellen McGrath Smith at 5:01 PM No comments: